The Shakespeare Day was celebrated at JM International School

No school curriculum is complete without one hearing about the literary genius of all times, the playwright par excellence, the poet with incomparable imagination, none other than William Shakespeare. To commemorate the anniversary of the Bard, The Shakespeare Day was celebrated with a lot of enthusiasm by the students of classes IV to VIII on 23rd April 2018 at JM International School, Dwarka. 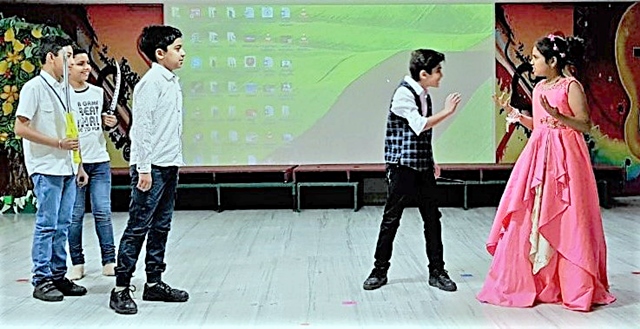 The day began with the unveiling of the display board on Shakespeare followed by a special assembly on the multi-faceted artist. A small enactment of a scene from “Taming of The Shrew” enthralled the audience. It was an eye opener as it exposed the students and staff alike to the works of this great litterateur. Regular lessons were set aside for the students to learn about the great playwright and poet, his sonnets, poems and plays. Not only did the students get a glimpse into his life through a video biography but also enjoyed viewing two of his famous plays, The Twelfth Night and Macbeth. As contemporary speakers of the English language they found it interesting that they had a lot in common with the Bard of Avon. Like them, he too was an endlessly imaginative man not overly concerned with grammatical conventions.

The day also saw a lot of enthusiasm and competitive spirit exemplified by the students as they actively participated in the Quiz on his masterpieces . They also came to know of the different genres he excelled in, like tragedy, comedy, romance etc. The round based on his famous soliloquies was specially entertaining. The students also attempted the worksheet based on his life  The Shakespeare Day reverberated with literary acumen.