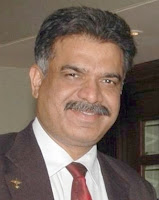 -Commander VK Jaitly
Have you heard about selective listening? The concept may be clear or not. Let me narrate an incident. A speaker was explaining the ill effects of alcohol to an audience during a talk on wellness. In order to re-inforce his point, he took two transparent glasses and poured clean drinking water in one and whiskey in the other. Then he took an earth worm and slowly put it into the glass with clean water. He then held up the glass to show the audience as to how the earth worm was enjoying swimming and diving in the clean drinking water. Next, he exhorted the audience to look at the glass full of whiskey and put another earth worm into it.
“Look! What happened?”
The earth worm disintegrated and disappeared in the glass of whiskey.
“Now, you understand how bad whiskey is for your health?”
Everyone in the audience was nodding his/her head in total agreement. The speaker looked around the hall and was satisfied that he could prove his point convincingly and then suddenly he saw one man smiling mischievously in one corner.
“Why are you smiling, my friend?” asked the speaker.
“Sir, now I understand that if you drink Whiskey regularly, you will never have worms in your stomach.” replied the man smilingly. The full hall burst into a loud laughter.
This gentleman was totally selective about the message he wanted to derive from the talk of the speaker irrespective of its objective. This is what we call Selective Listening.

I think when we listen to someone, we must listen fully, with an open mind. After that we can think about the message and then use our intellect to accept or reject totally or partially, that is our choice. But we must weigh the pros and cons of the message. Its utility for us, for the organization, for the society, for the nation and even for humanity and then take the decision. The conditioning of our mind plays a big role in such decisions of Selective Listening and then Selective Actions.

I have a friend who is a foodie and reasonably overweight and spends almost 12 hours in front of the TV. Recently, he crossed 60 years of age and decided to have a routine medical check up. The doctor after all the tests, found his cholesterol level to be a bit high. Rest everything was OK. So the doctor told him not to worry. Enjoy life. Eat what you like but in moderation. He also suggested that he maintains an active lifestyle with 4 to 5 kms daily walk or a bit of yoga or exercises for about half an hour. My friend came home and told his wife that doctor has told him to eat whatever he likes. He didn’t mention anything about the walk and the exercise and eating in moderation to his wife. So he was selective in his thoughts and actions as well as selective in accepting and conveying the message.

These days you’ll find that some TV channels and even the print media are very selective with their news coverage. That is totally against the ethics of journalism. They show what is dictated by their political masters and their funding agencies. And keep mum when they don’t wish to show some important news. I fail to understand why Indian media was highly selective and silent when about three lakh Kashmiri Pandits were forced to leave their ancestral homes of centuries in the year 1990. Their ladies and young girls were either raped or killed in scores and hundreds. The Indian media was a meek spectator or we can say totally ineffective in highlighting their plight. Same media suddenly becomes hyper for some incident of rape or arson in some part of India or the world and remains selectively silent for many other equally cruel incidents at some other places.

This type of selective behaviour is not good for any society or any organization. Some organizations openly demonstrate favouritism for select employees and have prejudice against another set of employees due to their caste, creed, colour or religion. There are times when discrimination is based on gender also. Many times people behave with you in a particular way depending upon your financial status or the model of the car that you drive or the wrist watch you wear or the mobile phone that you carry. They make an impression about you based on your materialistic belongings and accordingly behave with you selectively.

Many times some bosses demonstrate selective behaviour towards some of their subordinates totally based on their whims and fancies. They develop a strong liking for some and a strong disliking for some other. Such selective behaviour is not good for any organization in the long run. We’ve got to be inclusive in our behaviour, always and everywhere. As we go up the ladder of leadership, higher and higher, our responsibility to demonstrate our inclusive behaviour with all also increases. We just can’t afford to be selective in our behaviour.

There are times when you don’t like somethings about a person who is incidentally quite close to you. He/she could be your friend or a relative or even your spouse. So one option could be to avoid him/her. But in case of your spouse, you can’t avoid him/her ;-). So the best thing in such cases should be to selectively focus on the good qualities that the other person has. None of us is perfect. Each one of us has short comings. Accept the other person as he/she is. Be selective in knowing the good things about others and ignore the so called not so good things. When you look for good things in others and either ignore their short comings or highlight them in such a way, so as to help them overcome those shortcomings, in those situations, selective behaviour is good.

Sometimes, in schools and colleges, teachers develop special liking for some students. Normally, it’s because these students are good in studies and their performance is a shade better than others. They start giving them a lot of responsibility and visibility in various programs and activities. The behaviour of the teachers becomes a bit selective. There is nothing wrong in it. All students in any class are not equal. These brighter students can become future top scientists, doctors or engineers or excel in any field that they chose. So teachers may go a bit out of their way to guide such proactive students. The only thing they should keep in mind is that other students should not get a feeling of neglect. In fact, the teachers should take the help of such sharper students to engage even the other students who may be a bit shy or slow in their studies and other extra-co curricular activities.

Inequalities are a part of our life. All are not equal in any part of the world in any society or in any religion. We can’t be close to everyone. We can’t be friends with everybody. All of us have a tendency to mix around with people of our own strata, our own standing and may be even the language we speak plays a great part here. We are selective in choosing our friends based on our likings and common interests. There is nothing wrong in it. We may be cultivating a special interest with some people but showing even the smallest signs of hatred against anyone because of his/her colour or caste or religion or financial status is not acceptable in a civilized society. The cultures that spread hatred in the name of religion or colour or caste and even advocate annihilating others who don’t follow their dictum are a blot on this humanity and are a burden on this earth.

When God (and the nature for atheists) is not selective while showering his blessings or even the wrath on humanity, why should we be? When the severe storm came yesterday (13th May, 2018) in Delhi and surrounding areas, its wrath was same for everyone. If there was a lightening at some place, its impact was same for the rich and the poor, for the white and the black, for a Hindu or for a Muslim. At 4:30 pm, I was on the road and it became pitch dark and all vehicles were moving slowly with headlights and blinkers on. By 5:30 pm everything calmed down, the Sun beams started coming from behind the clouds and cool breeze was blowing all across for the rich and for the poor without any discrimination. We are all same in the eyes of that Supreme Creator. That is why, the Hindu Philosophy says: “Vasudhaiv Katumbkam”, meaning: The Whole World is One Family. Thanks to those Hindu Rishis who gave this message thousands of years back.

I feel sorry for some self styled, so called messengers of God who started the policy of reservation in heaven. They became selective in their behaviour to the extent that they said heaven was only for their own followers and all others who don’t follow them will go to hell and even scared them with the stories of fire of hell. What a degradation of thought process? Why can’t we treat all human beings equal? In fact, why not all the creations of God? If we are all sons and daughters of God, we are all equal. This thinking can only bring peace and harmony in this world.