Union Defense Minister Ms Nirmala Sitharaman here today called upon Indian women to grab every opportunity coming their way and stressed on the need of more women entrepreneurs contributing in the Indian armed forces as women have achieved great heights in all spheres of life. Ms Nirmala Sitharaman while speaking at an Interactive session “ ‘Stories that matter –journey of India’s First Full Time Defense Minister “ organised by FICCI Ladies Organisation (FLO), the women business wing of the Federation of Indian chambers of Commerce & Industry (FICCI) said "The woman entrepreneurs should find ways and means to increase their participation in defense production and procurement especially in non uniform sector , this will help in generating employment opportunities for women”

“ we are also taking steps to ease entry of women start-ups and provide leverage that gives them equal opportunities so that they can participate in tendering process to allow them to enter the defense supply in various sectors including logistics ” Ms Sitharaman said.

"Women are keen to join armed forces in Uniform , The Indian Air Force has already inducted women fighter pilots. About commissioning of women in Army and related forces several cases are being fought in various courts , In Navy women are not allowed in the sea, but we are working seriously towards opening up defense forces for women " Ms Sitharaman Said. 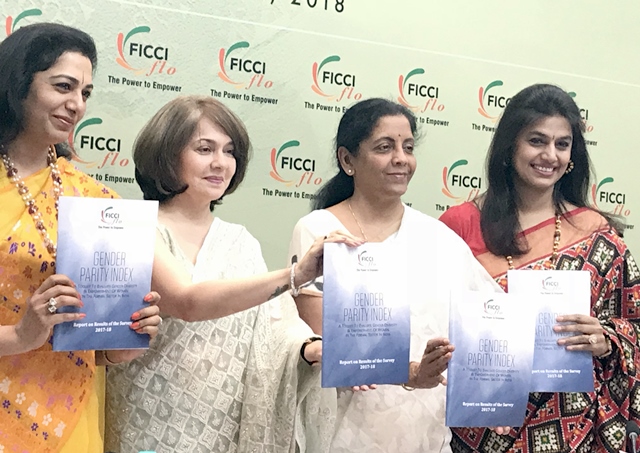 The minister while releasing a FLO Gender Parity Index for the year 2017-18 a special study commissioned by FLO which measures the extent of gender parity in the formal sector said " Organisations like FLO should also conduct a study on women in informal sector which employs more women than the formal sector. As in the Prime Minister's Mudra Yojna more than 50 % of women benefited and took loan .The study of employment generation and problems in informal sector needs to be studied and data collected"

FLO President, Pinky Reddy said, “FLO is the most apt platform to connect, learn and grow. We recognise the success stories of women who breaks all stereotypes and provide a platform for the members to be inspired by them. This programme was an excellent opportunity to be motived by the inspiring journey of an economist, to a politician and then to being the Raksha Mantri of a great nation like India.”

“Ms Sitharaman is An immensely passionate and fearless woman, with grit and determination and an icon of inspiration for each one of us– She is a real life hero and a winner in the journey” Ms Pinky Reddy said/

“The FLO gender parity index helps in bringing Gender equality which is intrinsically linked to sustainable development and is vital to the realization of human rights for all. The overall objective of gender equality is a society in which women and men enjoy the same opportunities, rights and obligations in all spheres of life. Equality between men and women exists when both sexes are able to share equally in the distribution of power and influence; have equal opportunities for financial independence through work or through setting up businesses.” Said Ms Vinita Bimbhet , Former FLO president while giving details about the Gender Parity Index.

“A number of global indices focus on empowerment of women and gender parity; however, most of them look at the subject from a macro view; almost all quantify the dimensions of control over resources and outcomes. None address gender parity at a micro level, in the formal sector. The FLO GENDER PARITY INDEX is broad and holistic which measures where an organisation stands vis-à-vis others while presenting a step-by-step guide to achieve higher levels of gender parity in different dimensions.” She added.