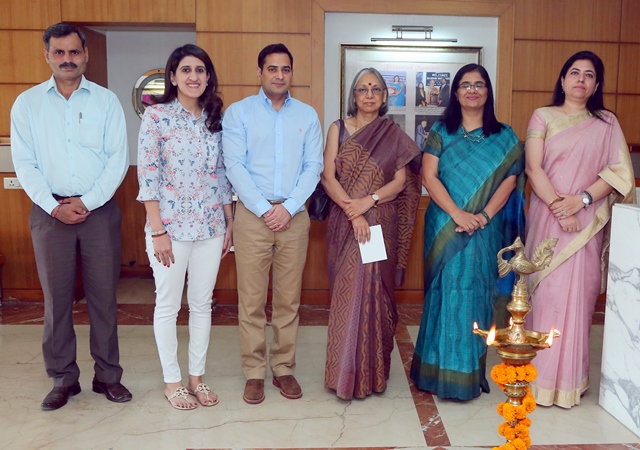 'Theater is a mirror, a reflection of society.'

HOGI Day on April 18, 2018 was the day to showcase the hard work and talent of the budding dramatists of SVIS Primary Wing and give all of them stage exposure to develop confidence to face an audience.

SVIS believes in the overall development of a child's personality, an endeavour which has the school collaborating with Helen O Grady International foundation for inculcating, the love for dramatics as well as to enhance communication skills.

The day was filled with excited students, performing confidently on stage, to a rapt audience of proud parents. The students of Grade V, worked hard along with the HOGI team and the staff to put up a show that was amazing as well as spell binding.

The day started with welcoming of the Chief Guest Dr. Promodini Verma who is a language specialist and Former Principal of Bharti College, Delhi University ; the leading light of SVIS, Our Chairman - Mr. Sailander Solanki and the School Principal - Ms. Nita Arora and the eager parents. It was followed by lighting of the ceremonial lamp. The performance was a rhapsody of theatrics, music and sounds that kept the little artistes alive and thrilled.

The curtains went up to showcase the acts - The Barber's Secret to A Tribal Hunt and the recitation of a poem 'Television' from Roald Dahl's book Charlie and the Chocolate Factory, encouraging all to read to avoid the horrors of television. Every child performed with fascinating conviction which made the performance a treat to watch. The dialogues, the lyrics and the humour marvelled the audience.

The finale was a dance performance “We could be heroes” - an idea that reflects that each individual has the capacity to shine and inspire others - which was immensely enjoyed by the students as well as audience, leaving them with sense of pride and ready for an enc