A High Octane Knowledge Sharing Event- ‘3rd Leadership Conclave’ is scheduled to rock the Capital City, New Delhi on  6th May, 2018 at Hotel Radisson Blu, Dwarka, New Delhi. The organizer is non other than a 15 Year old par-excellence training & leadership firm-‘ Knowledge Seed Learning Center’. KSLC has been instrumental  in imparting Corporate/Leadership/Motivational Training to more than 5000 professionals PAN India in top MNC’s, PSU’s , B. Schools, NGO’s etc and the count is on. 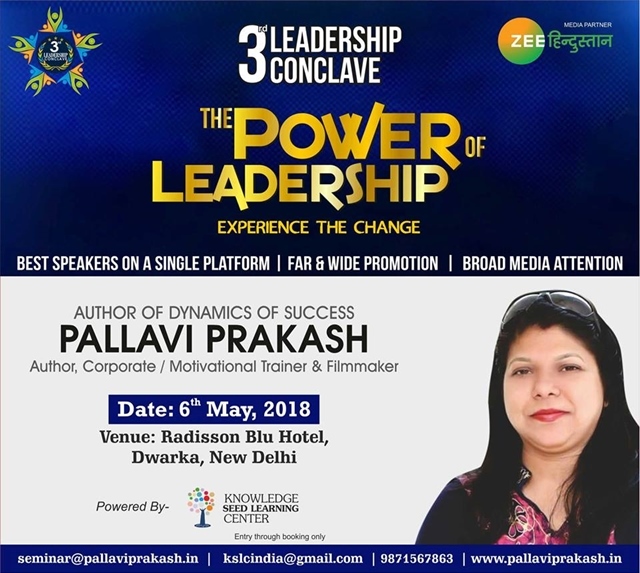 The event is in continuation with its ideological league of events which are regularly hosted by the aforementioned company. Pallavi Prakash who is the Founder of KSLC (Knowledge Seed Learning Center) & PPI (Pallavi Prakash International) states- ‘The objective of this program is to share inspirational success stories with the next generation of budding leaders which would eventually help them inculcate those skills’.  Pallavi is a celebrity Author , Filmmaker & Corporate Trainer. She has credit of 3 published books, corporate training delivery to more than 5000 MNC’s, PSU’s, B- Schools nationally & internationally plus production of many TV Shows & movies. Few of her promising projects are- “Pranam Bharat- A unique Travel Show” aired on ETV Rajasthan , “Mohabbat Ke Saugaat- A Film on woman empowerment (Received  Censor certificate & releasing shortly”) & Hindi Telefilm whose pre-production starts soon. With a dedicated team of professionals working for her, she has successfully ventured her both companies to higher avenues of success. She is the recipient of several awards like “Inspiring Woman Aacheivers Award”, “Media Excellence Award”, “Cinema Excellence Award”, “ Sabrang Film Award”, “Nari Shakti Award”, “Bihar Gaurav Award”, “Medha  Samaan”, “Chitrans Gaurav “ just to name a few. 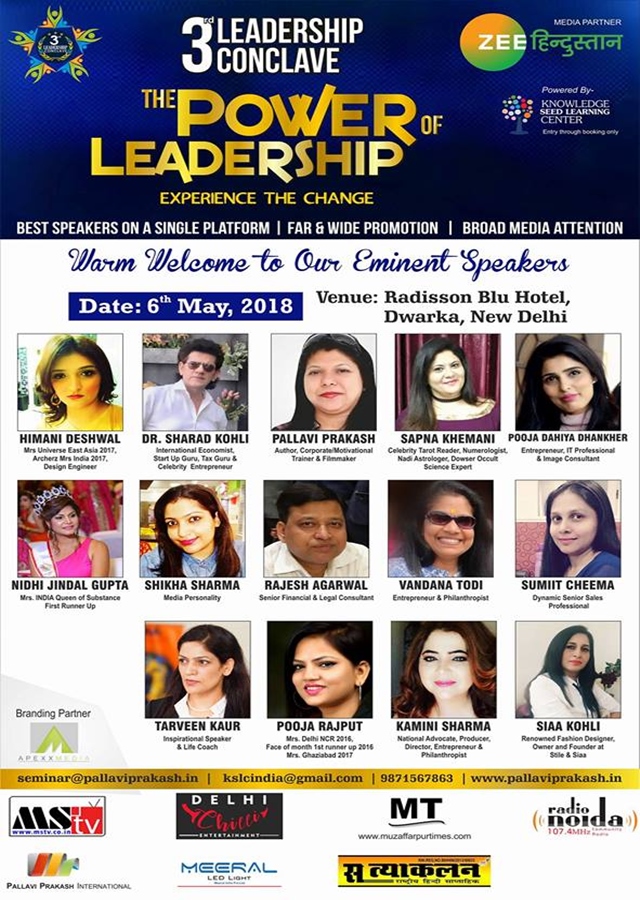 Amidst  the inspiring atmosphere the 2nd issue of Leadership Magazine- ‘The Leaders+’ by KSLC will be unveiled . KSLC will also confer “Leadership Excellence Award” to all Speakers & deserving achievers. The event would be attended by elite audience & tickets can be procured from meraevents.com & townscript.com
The 1st & 2nd Leadership Conclave organized by kSLC had also received nationwide applause for par-excellence conduct of the event. Few pictures of the event speaks for it’s grandeur & intellectuality..
In the wake of young professionals going delinquent over lack of success & leadership skills such events are the need of the hour. Team KSLC does intrinsic research & shapes up the conclave to suit the needs of students, professionals, aspiring leaders & home-makers who want to break the stereotype. Pallavi Prakash would continue to keep doing good work which would add value to society at large.