The Magical Effects of Chanting the Sita Ram Mantra


What is a mantra?

A mantra is a unique pattern of words or letters which has a hidden potent and mystical power to bring about specific results on being used in a particular manner.

Each mantra has a presiding deity or a mystical force to whom it is revealed and addressed. A person cans achieve supreme realization by meditating on a specific mantra. 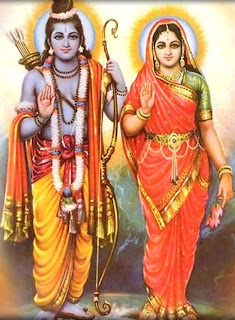 In Ramayana Ram means our soul, super consciousness, truth and virtue. Sita whose is the eternal consort of Ram means the primal energy or the Kundalini Shakti.

If Rama is considered as mariya purshottama or the perfect man the Sita exemplifies the perfect woman.

Ram as the symbolic of inner fire resides in Manipur chakra or solar plexus which burns away all the physical, mental, and spiritual impurities. While Sita as kundalini Shakti resides in Mooladhar or root chakra representing the earth element.

The Ram mantra ignite the internal fire that burns our all impurities and bad karma, while the Sita mantra activates the flow of prana in Sushumna Nadi, causing the upward movement of the Kundalini Shakti.

The subtle friction produced with the constant chanting of Sita Ram mantra, the Ida and Pingla nadis or sympathetic and parasympathetic nervous system gets activated and the Vagus Nerve or the Sushumna Nadi begins to vibrate. The Sita Ram mantra balances the both sides of brain.

The Sita Ram mantra in combined form recharge the whole body, all toxins, blockages and impurities are removed and self awareness becomes active.

How to chant Sita Ram mantra:

Sit in a comfortable posture. Relax the whole body and closed your eyes.

Gradually try to shift the chant from audible chanting to whispering chanting to mental chanting over the period of time.

You may chant the mantra in whispering or mental form all the day in any time and in any place.

*This is the easiest from of meditation for those who do not have proper spiritual master or guidance.
*This powerful yet simple chanting immediately improves the heath of the aspirant. Clear complexion, glow on face, lightness, sweet body odour, pleasantness of voice, slight excretion and gradual improvement of physical and mental health is indicated.
*It awakes the mysterious psychic awareness in the average individual as well as in the spiritual aspirant. Psychic power of different varieties and magnitude come to an aspirant as he progresses in this path.
*It balances the both sides of brain hence restless and unstoppable mind becomes still, harmonious and balanced. It increases the mastery over mind and senses.
*It induces the sound sleep in the seeker by curing the problem of insomnia.
*It integrates the personality of the seeker. The behaviour of the person starts transforming. The person will become sincere, honest, and straightforward in word, thoughts and actions.
*It induces one pointed devotion or Bhakti in the heart of the aspirant which is necessary for tasting the inner bliss.
*It protects us against all psychic attacks, black magic, negative thought, and evil invisible entities.

When to chant the mantra:

Mantra chanting can be practised in any time and in any place.
But it is advisable to practice it at regular time every day either early in the morning or before sleep at night.