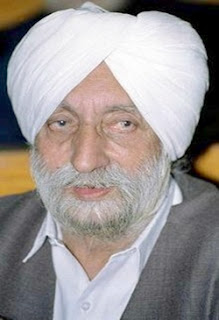 The dreadful nights, the weary evenings,
Bomb explosions, the looting and the killings,
Fire all around and blood strained streets,
Anger, anguish, terror and bestiality had reduced
Man to a mere play thing, stultified administration,
The bond of love that binds humanity and
Induces national integration was shredded to the core,
Frenzied manifestation of intimidatory tactics,
All newspapers splashed nothing but massacres,
Of innocent people relating to one community,
And the wild tempest uprooted many big trees in quick succession……….
And all human hearts yearning to get rid of ----
Deadly fangs of terrorism spread unwarranted ………

Experiment after experiment failed to check the menace,
All Mechiavellian manoeuvres flopped to click,
And the entire Punjab continued to bleed profusely………
Snatching sons of soil from the lap of mother earth,
Extinguishing fire from the hearths,
Widowing hundreds of young brides, and
Orphaning thousands of delicate and sweet buds ………

But “Noorpuri” knows the length of a tunnel matters a little …….
As there dawns light at the end of each one,
Whence the dark clouds of uncertainty
Disappear - to pave way for the new hopes,
Aspirations and events to make new history………

Amidst the religion in search of new domains,
And Punjab in search of new spearheading guards,
There appeared on the horizon, with a missionary zeal –
A dynamic star called - Beant Singh ………..

With imperturbable and invulnerable will-power,
He made a call to deglamorise militancy,
And realise the worth of priceless gift of God
His supreme creation amongst all - called Man!!

When others described the killers martyrs,
And attended “militant sponsored” Bhogs,
This simple and unpretentious Beant Singh,
Visited the families of the gunned down,
Consoling, soothing and boosting their Morales,
And called the misguided youths –
To abandon their mistaken inglorious paths ………


For the good of their todays, and
Tomorrows of the coming generations ;
And extend a helping hand in nation-building ………

His marshal KPS Gill supported him full,
And on his strategic moves, deployed his skills,
The daunting task with unflinching faiths,
Led the team to their cherished goals,
And soon the trigger-happy terrorists
Who were otherwise running the state,
Were now soon seen running for their lives ……….

Cornered by the compulsions and their stiff resistance by law,
The oppressors started distancing from arms,
And those frenetic and frigid met the fate –
And tasted the bullets to pay the price ……….

He became a symbol of freedom, defence of democracy
And beacon of new hopes for the state;
He proved no problem is big enough to escape solution,
If efforts are sincere and will-power strong ………

I wonder, one Beant Singh solved such a gigantic problem;
And alleviated sufferings of the millions,
Why can’t the galaxy of other leaders solve
Innumerable problems afflicting the nation ???

When Punjab was taking glorious strides,
And people basking in the newly found spring,
And the valiant soldier who symbolised harmony and development,
Faced again the inhuman and ruffians’ frenzy -------
And one dark evening eclipsed the shining star……..

“Oh dear Beant ! You may have parted ways from this mortal world,
But your deeds shall remain enshrined and studded in our hearts …….”

My stony eyes shed no tears for the demagogues,
But on 31st August, 1995, were just uncontrollable,
And my painful heart was just inconsolable ……….

My mind burning in grief and vision blurred in despair,
For thine death had created a vacuum ,
And left Punjab in an unspeakable agony ………

Oh God! He brought peace for the millions !
Let his soul rest in peace !!
And increase his scarce tribe !!!
And enable my India to make progress and prosperity,
By leaps and bounds and people get the much desired reliefs
And reprieve from innumerable sufferings and setbacks ........ 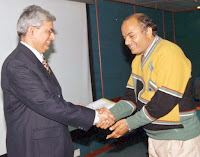 NB : After the sudden and tragic death of Shri Beant Singh, former Chief Minister of Punjab, in a bomb blast at Chandigarh, I could not sleep for a couple of days, and then when I was unable to sleep, one night I rose from bed at the dead of the night and thus, this poem was composed.