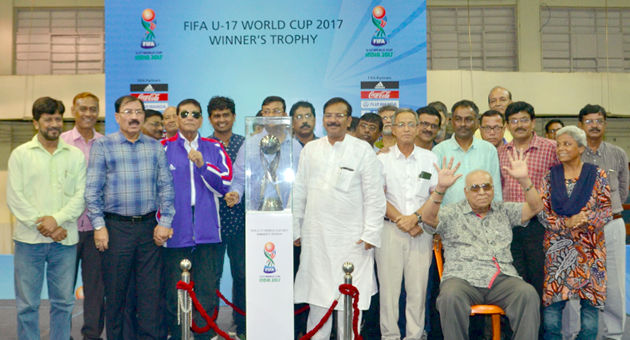 The Host City of the final of FIFA U-17 World Cup India 2017 hosted the Trophy Experience earlier today at Khudiram Anushilan Kendra. The Winner’s Trophy was unveiled by Shri Aroop Biswas, Minister of Sports and Youth Affairs, Government of West Bengal, amidst huge cheers in Kolkata.

Speaking about the Trophy Experience, he said, “It is a huge honour for Kolkata, a city known for its football fever, to host the Winner’s Trophy and the World Cup, which is only days away from now”.

The Winner’s Trophy will be displayed for football fans, residents and tourists in the city on Sunday, 3rd September, at Eco Park. Urging Kolkatans to come and witness the silverware, Shri Biswas added, “The Trophy that will be lifted at Vivekananda Yuva Bharati Krirangan on October 28th can be seen up-close for the first time in the City of Joy. Everyone should come this Sundayat Eco Park and be part of this wonderful experience”. 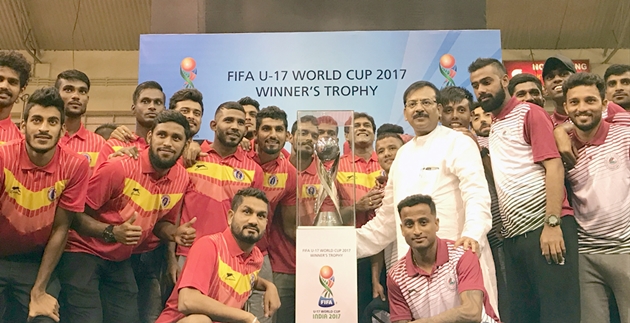 The occasion was made even more special with the presence of former greats like P.K. Banerjee, Shyam Thapa, Subrata Bhattacharya, Gautam Sarkar, Bidesh Bose, Prasun Banerjee and many other distinguished guests.

Current footballers from East Bengal and Mohun Bagan, two teams that share a historic rivalry, came together on the same stage to pose with the FIFA U-17 World Cup Winner’s Trophy, perfectly exhibiting the love of the game and the anticipation for what will be the biggest football tournament in the country.

The Winner’s Trophy will be on display at the Mission XI Million festival at South City International School tomorrow, where children who are a part of the legacy programme of FIFA U-17 World Cup India 2017 can come forward and pose with it.