As part of the ongoing FIFA U-17 Word Cup Trophy Experience in Goa, the Mission XI Million (MXIM) Festival created a magical atmosphere in Goa as more than 600 kids from schools all over the state participated in the football carnival at the Rosary Football Ground, Navelim on Saturday. 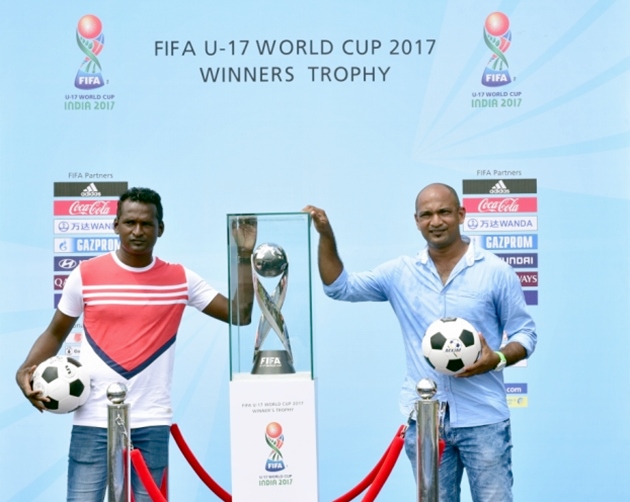 Former India international Avertano Furtado kicked off the MXIM festival stating that it is a wonderful initiative in the development of the game across the country and urged the children gathered to take up the game professionally.

As witnessed in New Delhi, Guwahati, Kolkata and Mumbai in the last few weeks, the participating students also got a chance to pose with the Winner’s Trophy of FIFA U-17 World Cup. The passion and love that Goa is known to have for the game of football was clearly evident at the festival with enthusiastic kids showcasing their skills during small sided games, fun activities and skills workshops.

After watching the enthusiasm and talent of display at the festival, Climax Lawrence praised the MXIM programme and said, “It is a great initiative taken by the Government of India and All India Football Federation to get children involved in the game of football. I hope some of them go on to become professional football players and bring laurels to the country”.

Speaking about the FIFA U-17 World Cup that begins in 20 days from today, he added, “I urge all Goan fans to show their passion and love for football by coming out in large numbers to watch teams like Brazil & Germany at the FIFA U17 World Cup in October".

The FIFA U-17 World Cup Winner’s Trophy which arrived in Goa on Friday was also on display at the event giving the kids and people gathered at the festival an opportunity to capture their moment with the prized silverware.

Goans will have another opportunity to take pictures with the Trophy as it will now move at the INOX Courtyard, Maquinez Palace Grounds on Sunday (September 17) from 3pm to 8 pm.

Goa will host nine FIFA U-17 World Cup India 2017 matches this October, including a quarter-final. Tickets for the matches can be bought at www.fifa.com/india2017/ticketing. Physical sales have also been opened in the Host City and fans can go to the Box Office at Sports Authority of Goa Indoor Stadium in Fatorda to purchase the tickets.