FIFA U-17 World Cup Trophy Experience kicks off in Goa


After enthralling fans across four host cities in India, the FIFA U-17 World Cup Winner’s Trophy was officially unveiled in Goa by the Honourable Sports Minister of Goa Shri Manohar Azgaonkar at the Pandit Jawaharlal Nehru Stadium in Fatorda on Friday. 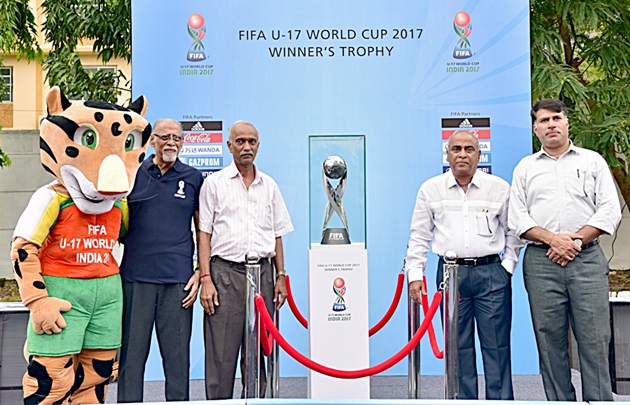 The event kicked off the Trophy Experience in the state, which is hosting nine games at the FIFA U-17 World Cup in October. Speaking at the unveiling, Sports Minister Shri Manohar Azgaonkar said, “Today is a proud day for us all Goans as the official FIFA U-17 World Cup is in our state. I urge all football loving fans in the state to come and be a part of this amazing experience before the start of the tournament”.

“Football is the official sport of the state and I’m sure Goans will turn out in large numbers to watch top teams like Brazil, Germany, Costa Rica and others in action at the stadium”, Azgaonkar added.

Football crazy Goans will have the chance to be part of the Trophy experience and see the Trophy up close at the Rosary Grounds Navelim on Saturday (September 16) from 9.30 am at a Mission XI Million festival that will see children from schools across Goa participate in several fun activities and small sided games. The Trophy will also be displayed at the INOX Coutyard, Maquinez Palance Grounds on Sunday (September 17) from 3pm to 8 pm.

Tickets for the tournament can be bought exclusively at www.fifa.com/india2017/ticketing