Enthusiastic Kochiites reached Fort Kochi to be a part of the FIFA U-17 World Cup Trophy Experience and click pictures with the Winner's Trophy. 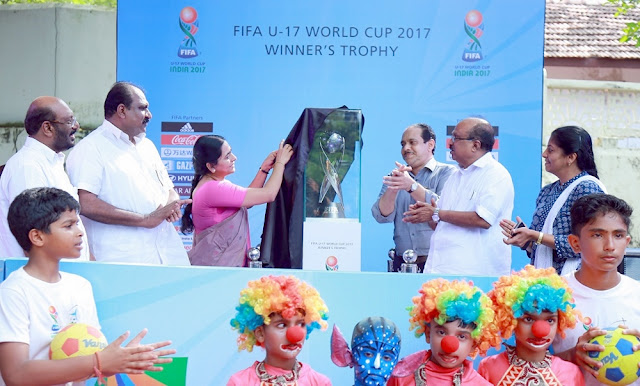 Present at the occasion was the Mayor of the City, Mrs Soumini Jain. Speaking about the ongoing Trophy Experience in Kochi, Mrs Jain said, “Now, all the Kochiites are eagerly waiting for the World Cup to begin and watch who is going to lift this beautiful Trophy”.

Keeping up with its multi-ethnic diaspora, Kochi celebrated various cultural art forms that were performed at the venue. A total of 145 cultural artists representing 16 different art forms enthralled the gathered crowd as people from all over Kochi thronged the Vasco da Game square at Fort Kochi to be part of the festivities.

On Saturday, the Winner's Trophy was placed at the Ambedkar Stadium in Ernakulam, giving the children participating in the Mission XI Million festival a chance to see it up-close.

The silverware has now travelled and completed the tour to all six Host Cities where it was at displayed for football fans, children, residents and tourists of India.

Kochi will host a total of eight matches, including the group game on October 7 between Brazil and Spain at 5 pm, followed by the match between DPR Korea and Niger at 8 pm. The other matches will be held on October 10, 13, 18 with the quarter-final scheduled to be held onOctober 22.

The other five Host Cities for FIFA U-17 World Cup India 2017 are Navi Mumbai, New Delhi, Goa, Guwahati and Kolkata.