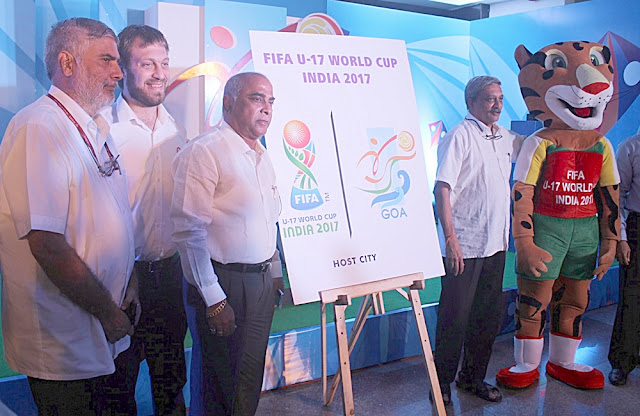 The Goa logo resembles a common sight of people playing the ‘beautiful game’ in the green fields of the coastal state bordered by swaying coconut palms in the light of the evening sun. The colours used for the logo includes a dash of every competing nation's flag which symbolises unity among all participating nations.

Speaking at the launch Chief Minister Manohar Parrikar said, “Goa is getting ready to welcome the teams for the FIFA U-17 World Cup. Goa loves football that is why we have declared it as the official sport of the state. Agreeing to host the tournament in Goa was one of the fastest decisions taken by the Government and we will continue to extend our full support to make the event a grand success,”.

The logo will be an important tool in linking the local community in a global world and form a crucial link in the promotions and communications in the football crazy state of Goa.

Tournament Director, LOC, FIFA U-17 World Cup India 2017, Javier Ceppi said, "We are very happy that Goa now has an image associated with the tournament. The state government has promised to take the host city logo all around the state and to do a big promotional push for the tournament which is fantastic. To support that we will be opening the sales of physical ticket at the Fatorda stadium box office onSeptember 7. We are appreciative of the help and leadership provided by honourable Chief Minister Manohar Parrikar and we are sure under his watch the FIFA U-17 World Cup will be a huge success in Goa,”.

The Goa matches will be played at Pandit Jawaharlal Nehru Stadium in Fatorda that will host nine matches this October featuring powerhouses Brazil and Germany among others.

Goa is one of the 6 venues that will be hosting the FIFA U-17 World Cup with the others being New Delhi, Kolkata, Kochi, Guwahati and Navi Mumbai.

Tickets can be bought from www.fifa.com/india2017/ticketing.