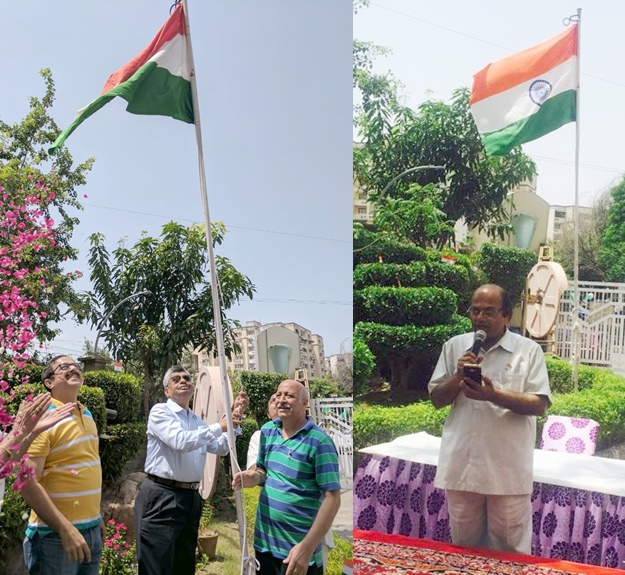 71st Independence Day was celebrated by New Rashtriya Society, Plot No. 15, Sector 18-A, Dwarka, on the 15th August, 2017, from 9.00 AM onwards. Initially, painting competitions were held for the children in three age group categories, i.e. Painting competition for children in the age group of between 3 to 6 years, seven to ten years and eleven to fifteen years. The children participating in this competition were given a time of one hour to complete their paintings and the Theme was to make any painting relating to India's independence. In all 34 children enthusiastically participated in making their painting better than others. This competition was over by 10.00 and a panel of three judges were given all the paintings to evaluate and give them marks based on adhering to the theme of paintings, colouring patron / scheme, neatness and presentation etc. All the materials for drawing various paintings was provided by the Society itself.

Thereafter, our National Flag was unfurled at 11.00 AM by Shri Ravinder Verma, President of the Society along with group of small children and it was followed by singing of National Anthem by one and all, which was further followed by distributions of cold drinks etc. Speaking on the occasion, Mr. Verma emphasised the need for inculcating the spirit of nationalism, keeping in mind the sacrifices made by our great freedom fighters and also making a habit of keeping out atmosphere neat and clean. Most of the members and many other residents of the Society had assembled in the court yard of our Society (along with their family members) in a very happy, elegantly dressed and in a gaiety mood. Small children were particularly enthusiastic about this celebration as they were very curious to know and experience to see for themselves as to how the events are going to take place. The young budding artists were really bubbling with energy and a lot of enthusiasm. 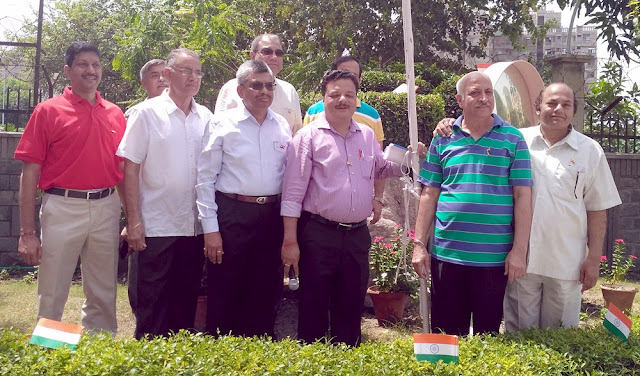 Then, cultural programme was started and many children sang patriotic songs eulogising the great freedom struggle of our country. First item was presented by Snavya Jain by giving a Kathak Dance performance on a English song - Shape of You. Then two girls - Srishti and Shivanshi Kaul also gave a dance performance on a patriotic song. Pragun and Pranshi Batra sang a beautiful song - Twinkle Twinkle Little Star, Krishna Is My Super Star........... Then a small doll like little girl Divyanshi recited a poem - यह हिन्दुस्तान हमारा है ....... and another small girl Aaradhya Mehta also recited a patriotic poem. Some 7/8 more children also sang some beautiful patriotic poems and made the whole atmosphere lively and entertained the audience. Some small children were seen shouting slogans in high pitch like Bharat Mata Ki Jai, Jai Hind and Vande Matram etc., in a very enthusiastic manner and echoing the spirit of patriotism and nationalism. 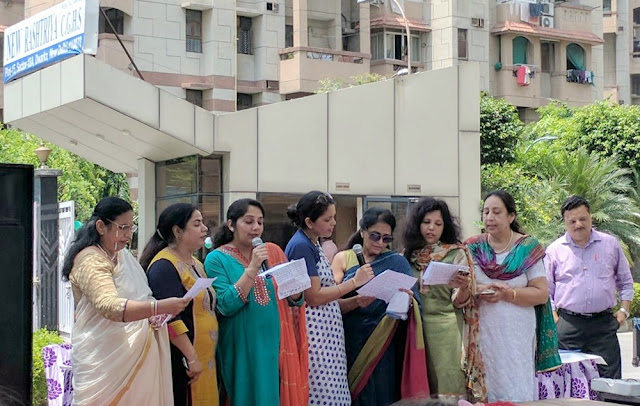 Sports Events : Then some race events (50 Meters, 100 Meters and 300 meters) were conducted for children in 3/4 different age groups. Musical Chair Races were also conducted for the ladies and gents as well and these two sports events provided a lot of fun and humour to participants and viewers as well.

And lastly, prizes were distributed to all the winners of 1st, 2nd and 3rd positions. Shri Ravinder Verma, President of Society, gave away prizes to the prize winners. Efforts of the Managing Committee of the Society were appreciated by many members and residents of the Society as they opined that it is only through holding of such festivals and gathering the majority of the people residing in our Society get a chance to meet one another. Rohit Gupta, Secretary of the Society conducted the entire function as convener of the show. 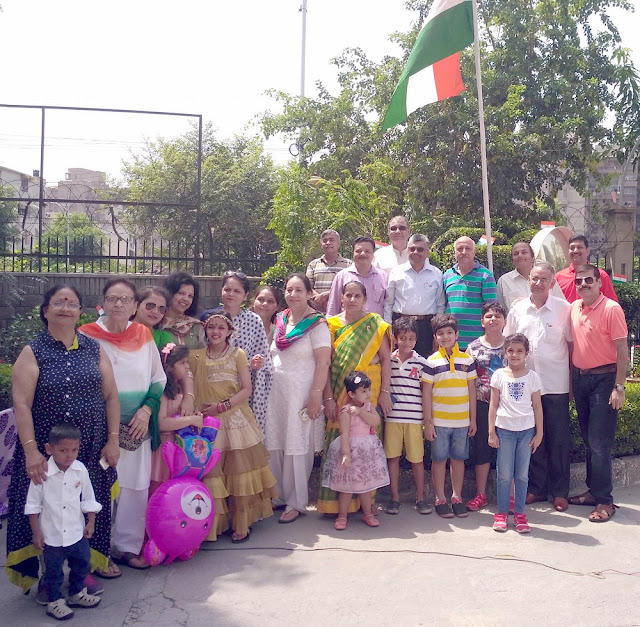 Society get a chance to interact and socialize with one another and talks in very free and frank atmosphere. Celebration of these functions in a cordial and friendly manner, becomes very much essential as they promote the spirit of friendship, mutual trust, brotherhood and the spirit of nationalism / patriotism also gets boosted.

Some prizes to were also given by a senior member of the Society, Mrs. Raj Deewan to those people who sang some songs and poems etc. Then President of the Society thanked all those members and employees of the Society who expended a helping hand in conducting the Independence Day programme and making this celebration a great success. The function came to a close at 2.00 PM, which was followed by lunch.