It was an overwhelming occasion for everyone present at Vishwas Vidyalaya in Gurugram as ahead of India's 70th Independence Day, more than 300 children, including those with special needs, gathered in large numbers to show their love for football at the Mission XI Million festival. 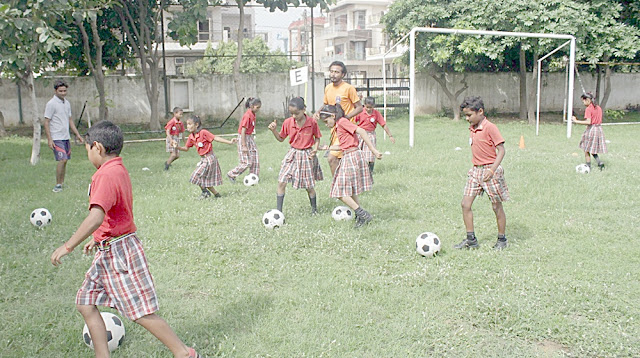 What set this apart from the other MXIM festivals that have taken place till now is the fact that for the very first time, it took the beautiful game to children with special needs. The Vishwas Vidyalaya -- the Vision for Health Welfare and Special Needs -- caters to the requirements of specially abled children in and around Gurugram.

All students, teachers and administrators warmly welcomed the festival, which also coincided with the Independence Day celebrations in the school. Football was taken up by the specially abled children, who showed great enthusiasm in the activities organised for them.

Speaking at this unique festival, Tournament Director of the Local Organising Committee for FIFA U-17 World Cup India 2017, Javier Ceppi said, “When we stated that we are reaching out to the whole India, this is what we meant. The Vishwas Vidyalaya does a fantastic job, and we wanted to bring the joy of Mission XI Million to their school and children. They were delighted to be exposed to football and the World Cup. That is the most important aspect of MXIM, to bring football to everyone. Only then we will fulfil the mission of football taking over India”.

Apart from engaging in exhibition matches and football drills, the festival also saw other interactive events like drawing competitions with the theme being 'Football'. Students also enjoyed a session with freestyle footballers who wowed them with their skills with the ball.

Project Director of the Local Organising Committee for FIFA U-17 World Cup 2017, Joy Bhattacharjya underlined the importance of the festival and said, "We have had many great MXIM experiences with a variety of children over the past years. But this is truly unique. We wanted football to reach each and every corner and each and every child in the country. On this Independence Day, this is a significant step in the direction".

More than 7 million children have been brought into contact with football so far under the aegis of Mission XI Million, the legacy programme of FIFA U-17 World Cup India 2017.