The six Host Cities of the tournament – Goa, Guwahati, Kochi, Kolkata, Navi Mumbai and New Delhi – are waiting to welcome fans from India and across the world and witness some of the world’s brightest talents take the field. 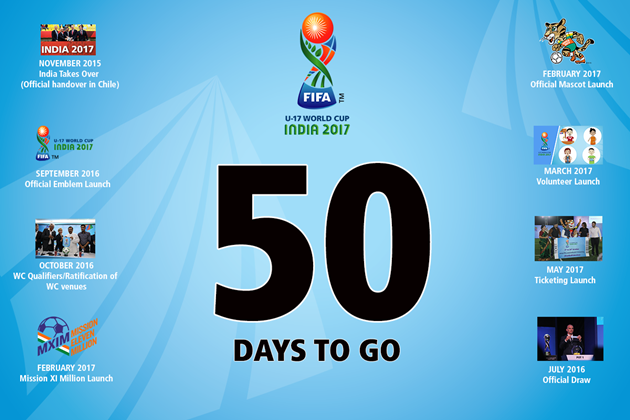 "The Tournament is fast approaching and we see the interest from fans in the country increasing day by day. Fans are eagerly awaiting the opportunity to see world class football live in their own cities. There is an atmosphere for football that has been gaining momentum in India and we hope that it will result in the country showing full stadiums to the world when the World Cup comes,” said Javier Ceppi, Tournament Director of the LOC for FIFA U-17 World Cup India 2017.

At 5 pm IST on 6th October, Colombia and Ghana will lock horns at the Jawaharlal Nehru Stadium in New Delhi, and New Zealand and Turkey will play at the Dr DY Patil Stadium in Navi Mumbai.

Speaking about the milestone, Joy Bhattacharjya, Project Director, LOC, FIFA U-17 World Cup India 2017 added, “The Tournament is just around the corner. We are looking to ​keep ​the Tournament,​ top of mind with the support of all our partners. We all need to give it our utmost to make sure the Indian team has the maximum support possible for the ​World Cup ”.

The FIFA U-17 World Cup, where a host of world famous stars first made their breakthrough, will feature 24 teams from every confederation. Fans can book their place in history and buy tickets to watch the matches live at www.fifa.com/india2017/ticketing.